"We have detected gravitational waves. We did it," announced Caltech research professor David H. Reitze, who is executive director of the Laser Intergravitational-Wave Observatory (LIGO) Laboratory, during his opening remarks at a February 11, 2016, National Science Foundation press conference at the National Press Club in Washington, DC, to provide update on the search for Gravitational Waves.

For the first time, scientists have observed ripples in the fabric of spacetime called gravitational waves, arriving at the earth from a cataclysmic event in the distant universe. This confirms a major prediction of Albert Einstein's 1915 general theory of relativity and opens an unprecedented new window onto the cosmos.

Gravitational waves carry information about their dramatic origins and about the nature of gravity that cannot otherwise be obtained. Physicists have concluded that the detected gravitational waves were produced during the final fraction of a second of the merger of two black holes to produce a single, more massive spinning black hole. This collision of two black holes had been predicted but never observed. 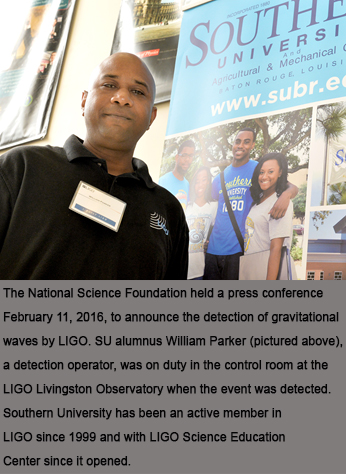 The gravitational waves were detected on September 14, 2015 at 5:51 a.m. Eastern Daylight Time by both of the twin Laser Interferometer Gravitational-wave Observatory (LIGO) detectors, located in Livingston, Louisiana, and Hanford, Washington, USA. The LIGO Observatories are funded by the National Science Foundation (NSF), and were conceived, built, and are operated by Caltech and MIT. The discovery, accepted for publication in the journal Physical Review Letters, was made by the LIGO Scientific Collaboration (which includes the GEO Collaboration and the Australian Consortium for Interferometric Gravitational Astronomy) and the Virgo Collaboration using data from the two LIGO detectors.

At the helm in the control room at the LIGO Livingston Observatory was Southern University alumnus William Parker, who first noted the anomaly and alerted staff of a possible detection after getting calls from other researchers involved in the scientific observation for gravitational waves.

"At first I was just calm, but as the calls piled up and we began the process of verification, I was excited and very contemplative. This has been an awesome journey," said Parker.

Parker, a New Orleans native, began studying at Southern University New Orleans as a scholar of the Louis Stokes Louisiana Alliance for Minority Participation (LS-LAMP).  He transferred to the Baton Rouge campus after Hurricane Katrina where he continued to be an LS-LAMP Scholar.  LS-LAMP is funded by the NSF and has documented success with increasing the number and quality of minority students earning baccalaureate degrees in science, technology, engineering and mathematics disciplines.  Parker earned an undergraduate and master's degree in mathematics/physics. Parker started working at LIGO as a student docent at the Science Education Center (SEC) while still enrolled at SU, and was hired last year as a detector operator.

Southern University has been an active member in LIGO in the area of optical materials research since 1999. The University's work focuses on minimizing noise in LIGO test mass mirrors in order to help maximize the sensitivity of the LIGO interferometers.  These investigations have involved detailed experimental and computational studies of atomic composition and chemical structure of the mirror coatings by SU faculty members and students from the physics, chemistry, mathematics and computer science departments.

"We have recently begun studies of mirror surfaces at distances of about one billionth of a meter using the technique of atomic force microscopy. Obtaining an improved understanding of noise generation and light scattering at a microscopic level are our main goals," said Stephen C. McGuire, professor of physics, principal investigator - LIGO Scientific Collaboration (LSC), Southern University and A&M College.

The SU work has stimulated collaborations with a broad spectrum of LIGO scientists, in addition to the National Institute of Standards and Technology (NIST at Gaithersburg, MD), Caltech, the Stanford Synchrotron Radiation Laboratory (SSRL), and the Louisiana State University (LSU) Center for Advanced Microstructures and Devices (CAMD).

"We all can take pride in having Southern University and A&M College be a part of this historic event in the life of the state, nation, and the world. The event encapsulates 15 years of creative work, dedication, and contributions to science and science education outreach by our faculty and students in achieving this recognition," McGuire added.

Additionally, Southern University is a founding partner in the LIGO Science Education Center that engages faculty and students from across the campus as well as the community in science education through in-service and pre-service programs that primarily impact K-16 teacher preparation. SU College of Education, Arts and Humanities professor Luria Young is principal investigator for SU LIGO SEC Partnership. Many SU students have worked as SEC docents including Parker.

"Southern University is honored to be a part of this groundbreaking discovery and scientific research. Congratulations to the collaborative team for their persistent interest in proving the prediction of a renown theoretical physicist," said SU System President Ray L. Belton.

LIGO research is carried out by the LIGO Scientific Collaboration (LSC), a group of more than 1000 scientists from universities around the United States and in 14 other countries. More than 90 universities and research institutes in the LSC develop detector technology and analyze data; approximately 250 students are strong contributing members of the collaboration. The LSC detector network includes the LIGO interferometers and the GEO600 detector. The GEO team includes scientists at the Max Planck Institute for Gravitational Physics (Albert Einstein Institute, AEI), Leibniz Universität Hannover, along with partners at the University of Glasgow, Cardiff University, the University of Birmingham, other universities in the United Kingdom, and the University of the Balearic Islands in Spain.

Virgo research is carried out by the Virgo Collaboration, consisting of more than 250 physicists and engineers belonging to 19 different European research groups: 6 from Centre National de la Recherche Scientifique (CNRS) in France; 8 from the Istituto Nazionale di Fisica Nucleare (INFN) in Italy; 2 in The Netherlands with Nikhef; the Wigner RCP in Hungary; the POLGRAW group in Poland and the European Gravitational Observatory (EGO), the laboratory hosting the Virgo detector near Pisa in Italy.

The discovery was made possible by the enhanced capabilities of Advanced LIGO, a major upgrade that increases the sensitivity of the instruments compared to the first generation LIGO detectors, enabling a large increase in the volume of the universe probed-and the discovery of gravitational waves during its first observation run. The US National Science Foundation leads in financial support for Advanced LIGO. Funding organizations in Germany (Max Planck Society), the U.K. (Science and Technology Facilities Council, STFC) and Australia (Australian Research Council) also have made significant commitments to the project. Several of the key technologies that made Advanced LIGO so much more sensitive have been developed and tested by the German UK GEO collaboration. Significant computer resources have been contributed by the AEI Hannover Atlas Cluster, the LIGO Laboratory, Syracuse University, and the University of Wisconsin-Milwaukee. Several universities designed, built, and tested key components for Advanced LIGO: The Australian National University, the University of Adelaide, the University of Florida, Stanford University, Columbia University of New York, and Louisiana State University.

The first direct detection of gravitational waves and the first observation of a binary black hole merger are remarkable achievements, but they represent only the first page of an exciting new chapter in astronomy according to the LSC.

"We will see others [gravitational waves] caused by other astrophysical event," said Kip Thorne, LICO co-founder and The Feynman Professor of Theoretical Physics, Caltech.

"We will see big surprises through the gravitational waves window."