From performing high-volume rhythm and blues, to playing flawless, show-stopping classics, from popular hip hop dance moves to precision drill steps, the Southern University Marching Band is without question a spectacular force. Redefining college band style, the SU band's success is measured by excitement of its vast and diverse audiences. Look around during any band performance and the crowd is definitely tuned-in and captured by the powerful sound and talent of the co-ed musicians. Halftime performances find fans of all ages rocking to the beat of the drumline, or swaying to the familiar sound of a top-40 tune, and being mesmerized by the creative dance moves of the fast-stepping band members and dance team.

Dubbed the "Human Jukebox" years ago, the SU band has achieved legendary status as one of the nation's top collegiate bands. Dedicated to the art of music through providing fresh and unique entertainment with a creative flare, the 215 member band enjoys a long list of awards and achievements and has a resume of appearances on local, national, and international stages. 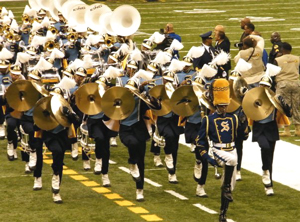 The band has performed around the world, including performances for three United Stated presidential inaugurations, four Sugar Bowl and five Super Bowl appearances, as well as appearances in Reliant Stadium, the Superdome, Georgia Dome, Yankee Stadium Coliseum, and the famed Radio City Music Hall for six weeks. The band also has appeared on several national television shows, in two of film director Spike Lee's production, and an award-winning documentary by NFL Films.

In the summer of 2000, the SU band was featured in the Bermuda Day parade and also performed a live concert for the citizens of Bermuda. In 2002, the band out performed more than 20 college bands to win Motown Record's marching band competition for black college bands. Southern took home the top prize of $10,000 cash. In 2004, the Southern University Marching Bands was the only band in the country ever featured on ABC's Nightline. In 2008, the Human Jukebox was named "Best Dressed Band" by fashion magazine. The band takes pride in its appearance and performance. In 2010, the band performed for the NFC Championship Game between the New Orleans Saints and the Minnesota Vikings.

Perhaps the most significant and historic moment recently for the Southern University Marching Band was when the New Orleans Saints returned home to the Louisiana Superdome on August 25, 2006, after Hurricane Katrina devastation. Southern University's world-renowned Human Jukebox entertained more than 70,000 fans during halftime.