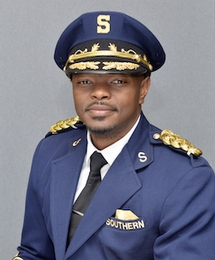 Taylor, a Southern alumnus, participated in the Southern University Marching Band (“Human Jukebox”) for four years while he was a student, serving as Trumpet Section Leader in 2005. He has worked with the Southern University Band Department since 2014, most recently as the Associate Director of Bands. In his role as Associate Director of Bands, Taylor has been responsible for music arrangements, band rehearsals, as well as directing the saxophone and wind ensembles.

A native of Mobile, Alabama, Taylor has previously served as Head Director of the Baker High School, Louisiana Leadership Institute, Louisiana Sounds of Dynamite All Star, and Jackson High School Bands. While in college, he served as Assistant Director of Bands for the Mobile All Star and Feliciana Community All Star Bands.

Taylor also has served as an adjudicator for numerous “battle of the bands” competitions and as a guest clinician for districts in the southern region. Taylor, who is an Instructor in the College of Arts, Humanities and Interdisciplinary Studies at Southern, holds a Bachelor’s Degree from Southern and a Master’s Degree from North Central University. Taylor also has completed additional graduate studies at the Vandercook School of Music.