One week before the Southern University (SU) "Human Jukebox's" 2016-2017 season-opening performance, fans attending the McDonald's Queen City Battle of the Bands in Charlotte, North Carolina, will get a sneak preview of the SU Marching Band's unique style and latest talent.

The often imitated, but never duplicated marching band from the Jaguar Nation will showcase its famous showmanship in the annual Queen City Battle of the Bands, Saturday, August 27, 2016, 7 p.m. to 9 p.m., in Charlotte's Memorial Stadium.

"Be expected to see another performance that will set the SU Band apart, for it's the 'S' on our chest that makes us better than the rest," boasts SU director of bands Nathan Haymer.

The annual display of bands, sponsored by Webber Marketing, was created to support the experience offered by the showmanship, commitment, and dedication that it takes to be in a historically black college and university (HBCU) marching band, and has donated more than $160,000 in scholarship money to the participating schools in three years. 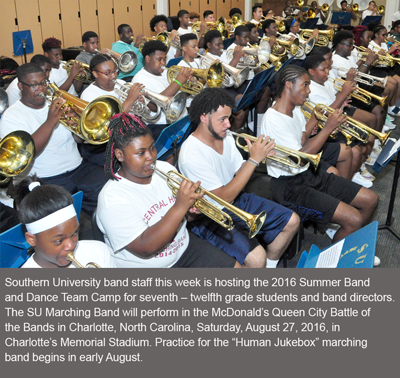 "At Webber Marketing we are committed to enhancing the exposure of Historically Black Colleges and Universities. The McDonald's Queen City Battle of the Bands event highlights the community's exclusive interest in HBCU marching bands and the roles that they play in educating aspiring musicians and developing our future leaders," said the event's creator Derek Webber, president/CEO Webber Marketing and Consulting, LLC.

In addition to travel and lodging expenses the Southern University Marching Band will receive a $10,000 scholarship donation for performing in the popular battle of the bands.

"The SU Band has performed in more Super Bowls than any other band in the country. We've performed on many national and international stages, but now is the time to bring the talents and passion of our band to the Queen City. We are looking forward to it," exclaimed Haymer.

For the next few weeks, the SU Baton Rouge campus will host and support efforts to help the band prepare for the exciting opportunity to showcase the exceptional flair and talent of its student musicians and band staff.

"Southern University is excited to support our world-renowned band for an inaugural presentation at the McDonald's Queen City Battle of the Bands. The growing excitement of the Human Jukebox 2016-2017 season is extremely high. The SU Band's Bayou Classic performance of 'Hello' by Adele, that went viral, has pushed the Human Jukebox to the forefront as the undisputed best HBCU band. The best is yet to come," said M. Christopher Brown, executive vice president and provost, SU System.

According to Haymer more than 200 prospects auditioned to join the 2016-2017 SU Marching Band. Approximately 100 freshmen have been added to the band's roster and are eager to become a part of the Human Jukebox.

Upper-class band members are ready to start the season as well.

Junior student and band member LaDonte Lotts says, "I am super excited to be able to showcase what the Human Jukebox stands for in North Carolina."

The new drum major, senior Brendon Guerin said, "I have always wanted to travel far with the band and for it to be my debut as drum major of the Human Jukebox, makes it that much more exciting."

Queen City Battle of the Bands fans will experience first hand the Human Jukebox's fame that is preeminent. The band ranked among the NCAA's Top College Marching Band's Halftime Shows of 2015. USA Today, Sports Illustrated, Sports View magazine, and Street and Smith's sports magazine, all have at times ranked the Human Jukebox the world's number one marching band.

The SU Marching Band will officially kick off the new season for Jaguar fans Saturday, September 3, at the first SU football game versus the University of Louisiana-Monroe in Malone Stadium in Monroe.