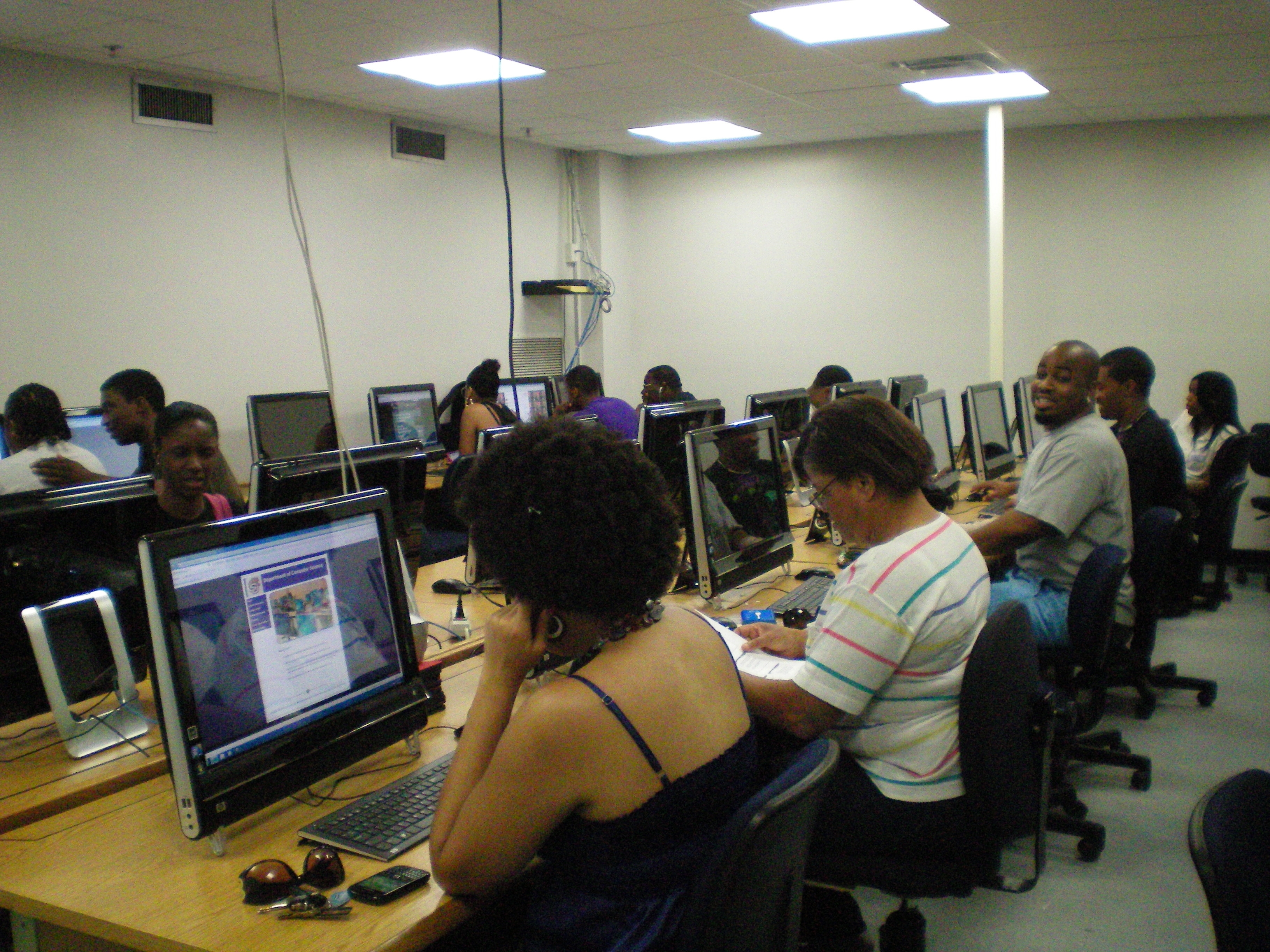 There are 29 HP TouchSmart 9100 all-in-one computers with 4GB of RAM in this laboratory. The computers provide enhanced multi-application performance. All computers are networked and have internet access. Another computer is prepared for instructor, which is connected to projector.

Microsoft Windows 7 professional is the operating system with Microsoft Office 2016 Professional as the main package.

This laboratory is used for courses CMPS 105 (Computer Literacy) and CMPS 290 (Microcomputer Applications in Business). The seating capacity for this laboratory is 30. These courses provide knowledge of the capabilities, limitations and implications of computer technology as well as an overview of the historical development of microcomputers in business. The focus is on application and use of operating system commands, word processing, spreadsheets, database managers, graphics, desktop publishing and presentation managers for business. 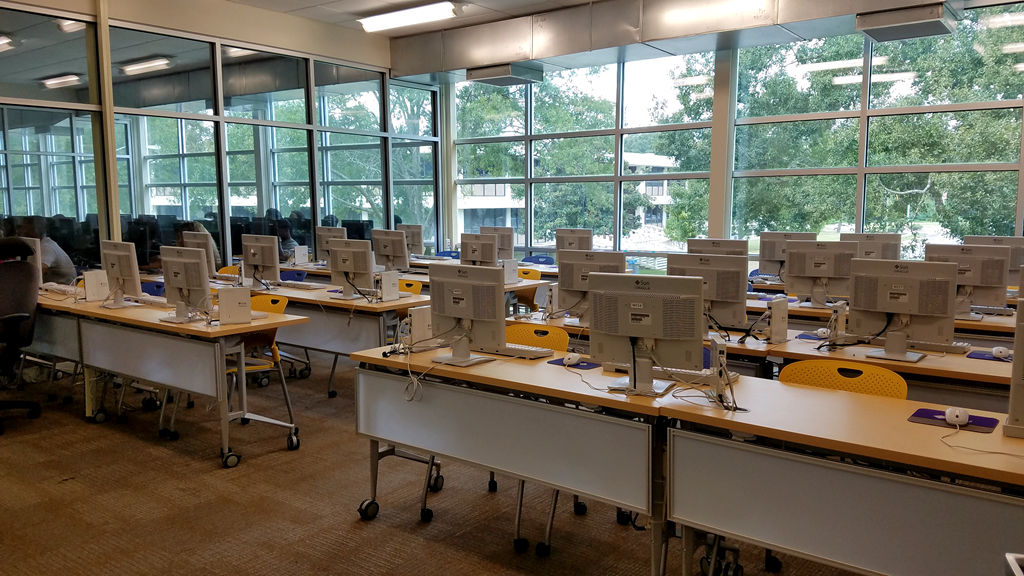 This laboratory consists of 27 Sun Ray clients which are ideal for displaying server-hosted virtual desktops. The desktops in this laboratory are networked and have internet access. Another terminal is for the instructor, which is connected to the large display TV.

Graduate and undergraduate classes are held in this laboratory. Students write programs in C, C++, JAVA, Python, and FORTRAN. This laboratory is used for instructional and programming purposes. 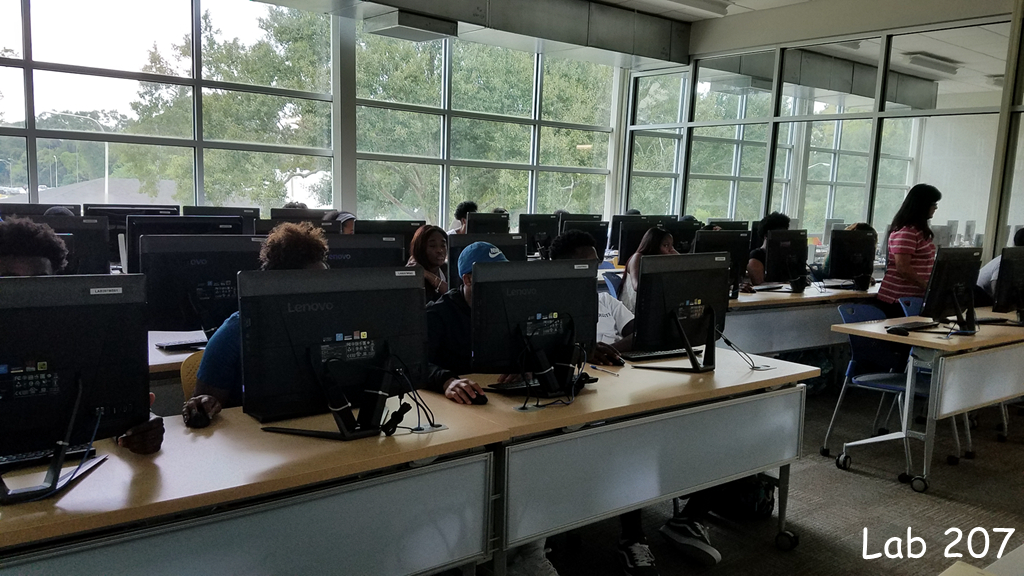 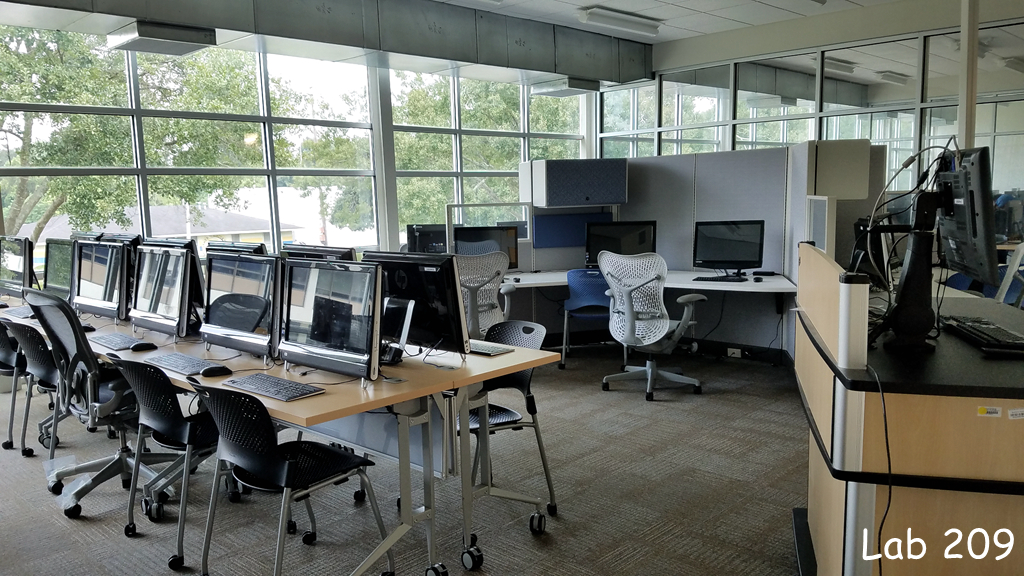 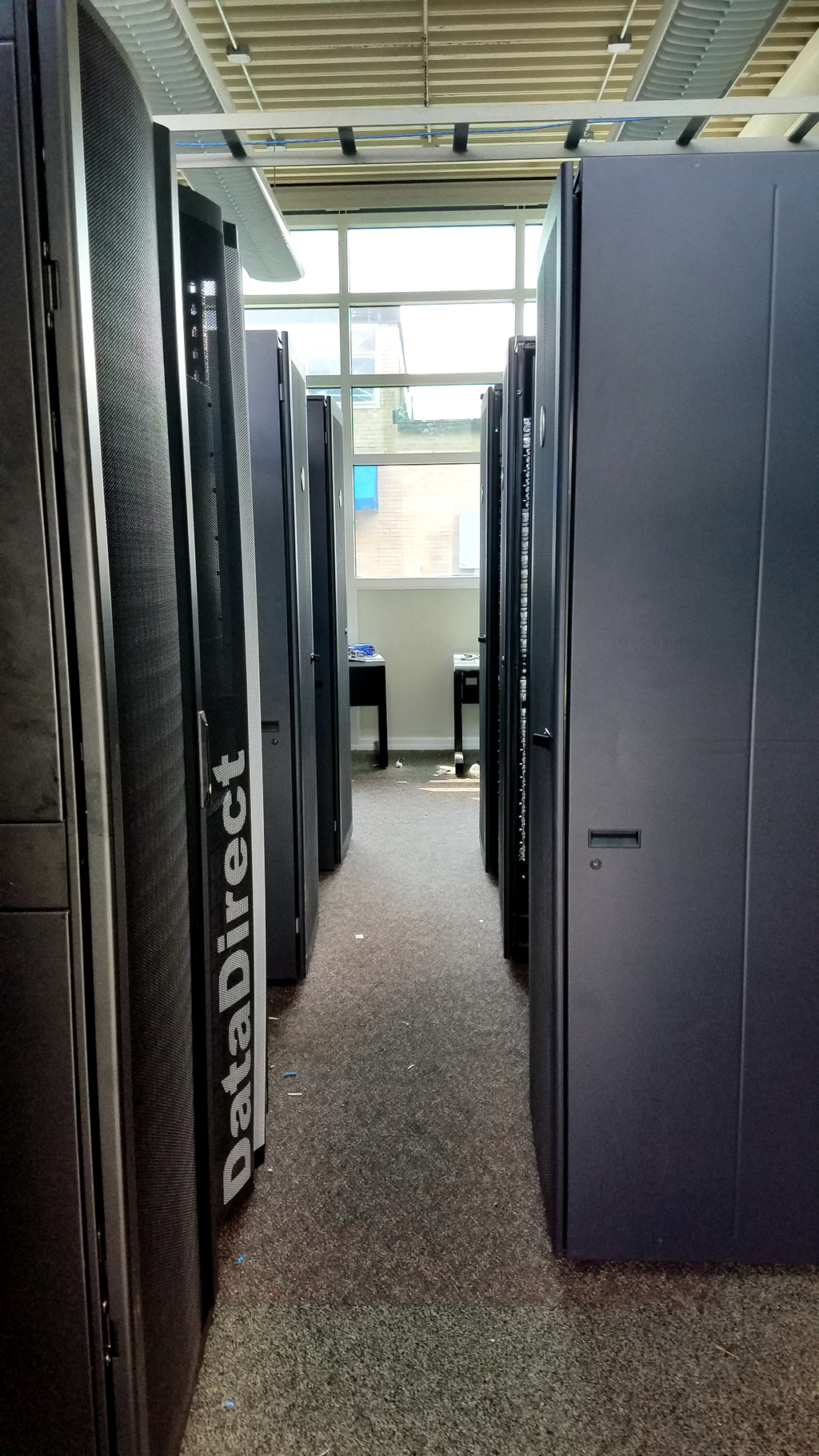 This server room consists of one Dell PowerEdge 2400 Server which is a domain controller (Windows 2003), two Dell PowerEdge R720 Servers (Windows Server 2012R2), one is the primary DNS Server, the other one is the secondary DNS server. There is one Sun Fire Server (Solaris 10) that serves all the Sun Ray Clients in the lab 205. There are two Dell Precision 330 Computers which are the departmental firewall. Moreover, there is one Dell OptiPlex GX520 as a Mail Server. The systems in the laboratory are networked and have internet access by way of two 24 port Nortel 450-24T switches, two Dell PowerConnect 2024 switches, two Linksys SRW224G4 switches and one 3COM 16 port 10/100 hub in this laboratory. This laboratory is used for network monitoring and network maintenance purposes. There are new server and SAN Storage used for faculties’ research (cron and biomed-storage). Also there is the virtual system that consists of two hosts, two giga-switches and one array storage that will be used for virtual machine servers.

It is partially funded by Raytheon and at the present time involves two faculties, Dr. E Khosravi, and Dr. A Salam, and two graduate students, Zaaker Ahmed Mohammed and Mingmin Bai along with several undergraduate students does the research, programming, testing, and works hands on with other Robotics Club students. The Robotics laboratory is equipped with standard robots and robotics supporting facilities necessary to provide robotics training. This laboratory has two QuadCrawler (4-legged) robots (Figure 1), one HexCrawler (6-legged) robot (figure 2) and Humanoid Robot (Human Eye) (figure 3). It is also equipped with a camera, sensors, Laptop, Tablet Pc, personal computers and some instruments.

The main object of this research is to make an autonomous robot which should • be tall enough to reach and perform human activities • be autonomous which means , it should be able to localize itself within a given environment and move autonomously on it, and all the computation and control must be performed onboard the robot. • be able to interact with humans through voice commands • be able to remember the person whom it met earlier using face recognition technology • be able to climb stairs and pull itself up when fallen down • be simple to control and light weighted.

The following facilities are available at SU CMPS High Performance Computing (HPC) Lab for faculty and their students to use for the modeling test and mediate size job tests:
1) Supercomputers: SU CMPS faculties are actively involved in using LONI supercomputers to perform HPC simulation to solve biomedical and materials front-end problems. Specifically, the most powerful supercomputer, Queen Bee 2 (QB2), is the core cluster of LONI (SU is one of the LONI six major research universities). It is a 1.5 Petaflop peak performance cluster containing 504 compute nodes with 960 NVIDIA Tesla K20x GPU's, and over 10,000 Intel Xeon processing cores. It achieved 1.052 PF during testing, and premiered at number 46 on the November 2014 Top500 list. The system is housed in the state's Information Systems Building (ISB), Baton Rouge. With special permission, faculty and students can also access and use LSU HPC SuperMIC, with 360 nodes of two 10-core and 64 GB memory each, which is compatible with QB2. These computers are supported by a whole array of peripheral hardware and software including Ethernet connections and all major telecommunication optical networks. With this equipment, we are able to perform large scale calculations that require both large memory and CPU time.
2) Data Storage & Servers: In the HPC Lab, there are three fast workstations for the modeling and preliminary code testing and a 32 TB JetStor 716F fiber connected storage for large biomedical data processing and saving. There are one HP9400 workstation with 4 CPU and 8 GB memory, one fast Windows XP workstation with 4 CPU and 64 GB memory for fast visual processing and large-scale data communication. One extra SUN X4240 workstation with 12 core and 8 GB (updatable to 32 GB) memory can perform fast optical network communications with bandwidth larger than 10 GB. A HP Proliant 490c G7 blade server with 36 core(three blades, updatable to 8 blades) connecting with optical VC flex-10 Enet module. It is setting up for high speed network, biomedical, and material modeling, test, and mediate size HPC simulation.
The Lab has purchased VASP, MedeA, CHARMM, AMBER, Wien2K, ICM Pro, and some data processing packages (CrystalMaker, WXDragon etc.) for modeling and code testing. Besides our material design software, LONI also has installed and supported following software on HPC systems: (1). applications: Fluent, Abacus, Matlab, Mathematica, Maple, ANSYS, LS-DYNA etc.; (2). compilers: C/C++, Fortran (IBM, Intel, PGI, GNU); (3). MPI: POE, MVAPICH, MVAPICH2, OpenMPI etc,; (4). libraries: MKL, GSL, ESSL, PESSL, NETCDF, HDF etc.; (5). grid: Globus, Condor, GRAM, GridFTP etc.; (6). Cybertools (http://cybertools.loni.org/). The above hardware and software are readily available for our course work and research program.